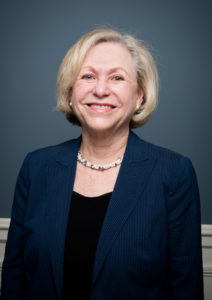 Barbara Meyers Pelson received a Bachelor of Science in Music from Trenton State College and a Master of Arts from Columbia University. Mrs. Pelson remains an active member of the campus community. She is a member of the TCNJ Foundation Board of Directors and a former member the College’s Board of Trustees (1996-2013).

From 2012 to 2017, Mrs. Pelson served as a co-chair of The Campaign for TCNJ: Innovate, Inspire, Engage, college’s first comprehensive fundraising campaign. During this time, she gave a gift of $1 million to The College of New Jersey Foundation to establish the Barbara Meyers Pelson Faculty-Student Engagement Endowment Fund. The purpose of the fund is to honor and support professors who have fully embraced the teacher-scholar model through an exceptional history of faculty-student engagement. The Chair is a three-year appointment and is open to full tenured faculty members from all departments.

In 1996, Mrs. Pelson and her husband Victor established the Barbara Meyers Pelson ‘59 Endowed Fund, which supports undergraduate education majors who have demonstrated both financial need and an outstanding work ethic.The scholarship gives a preference to music education majors— after a distinguished career as an educator and teacher, she is dedicated to empowering the future generation of teachers.

Mrs. Pelson’s career has been dedicated to developing and recognizing talent— her experience in the music classroom is no exception. As an accomplished pianist and educator, she taught choral and instrumental music throughout the Mountain Lakes, New Jersey school district, including the Mountain Lakes School for the Hearing Impaired. Before teaching at Mountain Lakes, Mrs. Pelson served as the Director of the Choral Program at Manlius High School in New York. Today, Mrs. Pelson oversees the Pelson Foundation, which provides funding for education, the arts and special needs programs. Her successful and fulfilling career has motivated Mrs. Pelson to devote herself to philanthropy and help others pursue their dreams.